Emma shared this post about climate change and yoga teaching on her own blog yesterday morning. We’ve reposted it here to share it with the wider QSY community.

In the past few months I have been re-inspired (particularly by this article) to set the tone of my yoga classes to include the awareness of rapid climate destabilization (aka climate change) as a present reality and backdrop to the “personal” or “internal” practice of yoga. I have also started to (subtly, slowly) introduce issues of race/racism and gender/sexism into the space of my asana classes. I hope to become more skilled at grappling with these pieces in my own life, as well as making them familiar vocabulary/reference points in my classes. I feel a bit clumsy at the moment, almost like I am learning to teach all over again.  These pieces (grappling with the reality of climate change, naming and responding to systems of oppression) feel closest right now to my spiritual core, so it makes sense that I am sharing them as part of my practice. I appreciate and acknowledge the work of others that continue to inspire and inform me in this arena (some of these others include Christi-an Slomka, Michael Stone and Matthew Remski). It is also such a gift to work side by side every day with Leena Miller Cressman, who values these pieces with the same fervour as I do, and together we are bringing these pieces to life at our studio. 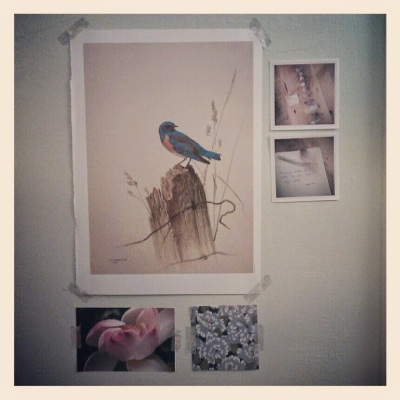 So, last night in one of my classes at Queen Street Yoga I shared a passage, a poem and a question. I called it “A Climate Change Collage”. In my recent reading and searching for insight about the decline of the ecological world, I felt as if a conversation was emerging between the different pieces I was reading and collecting. I cobbled them together and read them to my class to frame our practice for the night. The passage was by Martin Keogh, from the introduction to a book of essays called “Hope Beneath Our Feet: Restoring Our Place in the Natural World“. The poem was by The Reverend Victoria Safford, and I had heard it read aloud by Parker Palmer during a recent podcast produced by On Being. And the question was from an interview between EcoBuddhism.org and Joanna Macy, which a mentor had shared with me earlier in the week.

I shared these with my class, feeling nervous to bring such large and complex issues into the space of yoga practice. The wicked problem of climate change was not something I could summarize neatly or easily weave into my teaching. I felt grateful that most of the people in the room were students who had been coming to my classes for several years. I trusted that they would receive what I was bringing with grace, however awkward or bumbling I felt. I revealed in class that I felt at a loss often times about how to think or take action on climate change, but that it felt important to me not to ignore or turn away from it out of that confusion.

The passage:
“Sometimes bumping into a single piece of information can wake a person up to the plight of our world. This awareness came to me a few months after my son Dylan was born. In the warm comfort of our living room on a New England winter evening, I sat reading statistics on the decline of the world’s coral reefs. Glancing over at the face of my indant son as he slept in his mother’s arms, I imagined the world that he is to inherit. Those dying reefs suddenly did not feel far away – or so far in the future.
I was stunned  to learn that, while estimates differ, in a few decades – or maybe even less time – the coral reefs could be virtually gone. Coral reefs are a life support system not only for themselves and countless fish species, but also for the three hundred million people whose sustenance depends on the seafood harvested in these waters. We will not only have to cope with the loss of an entire habitat teeming with life – we will be starting right in the face of a global food-source collapse.”

The poem:
“Our mission is to plant ourselves at the gates of Hope — not the prudent gates of Optimism, which are somewhat narrower; nor the stalwart, boring gates of Common Sense; nor the strident gates of Self-Righteousness, which creak on shrill and angry hinges (people cannot hear us there; they cannot pass through); nor the cheerful, flimsy garden gate of “Everything is gonna be all right.” But a different, sometimes lonely place, the place of truth-telling, about your own soul first of all and its condition, the place of resistance and defiance, the piece of ground from which you see the world both as it is and as it could be, as it will be; the place from which you glimpse not only struggle, but joy in the struggle. And we stand there, beckoning and calling, telling people what we are seeing, asking people what they see.”

The question:
“From where do you derive the psychic resources to bear witness to all this, while keeping in touch with joy?”

I taught a sequence that centred around hip-opening, half moon and handstands. I struggled to link the gigantic themes with the actions or the poses (the importance of which had been hammered into me in my Anusara training, but the necessity and utility of which I have actively questioned in the past few years). At one point I joked “Maybe we can invoke a Pavlovian-like response to climate change if we keep linking it to our yoga practice. Maybe if a pose feels great and we’re present to the issue of climate change, we’ll be more opening to thinking about it in the future! We’ll think “climate change” and our body will remember feeling good.” I invited them to take their favourite pose and “contemplate climate change” at the same time. It felt like a way over-simplified approach, but a place to begin, nonetheless.

An aspect of the modern postural yoga class that I find quite limiting is that the teacher’s voice is usually the only one active during class. Sometimes students comment or respond, but usually they only make jokes or ask technical questions. I know that yoga class is not group therapy or group conversation but I do find myself hungry for other voices in the room. Especially last night. I wanted to know how they might begin to respond to that question. I feel as if there is far more wisdom in the room that would blossom in conversation, than I can generate from the front of the room. I want to ask them all, what do you see from your piece of ground?

At the end of savasana I read pieces of the Victoria Safford poem aloud again. Her words felt like the beginning of the answer to the question. That we can bear witness and touch joy when we open to and share across the space between us. “beckoning and calling, telling people what we are seeing, asking people what they see.”

What do you see?

Emma Dines is the manager of Queen Street Yoga. She loves writing about yoga, visiting thrift stores and going for walks in the woods. She also loves cartwheeling, sewing and making her own kimchi.