This post is by Neman, one of our yoga teacher trainees. In this post it he reflects on the relationship between asana (yoga postures), philosophy, religion and teaching yoga in the modern world.

Halfway through this inspiring yoga teacher training program, I’m stuck on something that seems to be nothing to pretty much everyone else. When I started, I thought that yoga meant asana – the postures. Wow, was I wrong. Karma, bhakti, jnana… where was asana? Fresh new words (some I didn’t even realize I knew – cool!) were describing much more about yoga to me than I bargained for. Hey, it’s not like I pretended I knew my way around the (yoga) block, but it was fascinating to see how much more there was, and how relatively insignificant downward facing dog is to yoga itself.

The core yogas as described in the Bhagavad Gita – there are many – include work (karma), devotion (bhakti), and knowledge (jnana). But where was the yoga for my core? Not there. The Bhagavad Gita is a primary text in Hindu philosophies and yoga studies. It’s a discussion between Arjuna, a very important prince and conflicted warrior, and Krishna, his chariot driver, who just happens to be, well, the Krishna. Yeah, that one. God. Krishna discusses duty, devotion, destiny, and dharma – but not down dog. References to asana are very limited and do not at all describe what we do in stretchy pants.

The Yoga Sutras of Patanjali doesn’t shed much more light on yoga… at least what I thought was yoga. While it does mention asana, there are no instructions on how to balance on your hands, or where to place your feet. (For that, you need a modern text like, say, Light on Yoga.) Further, it turns out that asana is only one limb of the eight that lead to a meaningful and purposeful life – and it’s not the first. It’s the third: to prepare one’s body as a vehicle for further study and devotion through meditation.

Chances are pretty good you already knew this. So what’s with the too-clever-by-half title?

I’m struggling with a key part – perhaps the key part – of yoga, and that’s Yoga. The yuj (the spiritual union, the yoking of mind and body), the religious aspect of Yoga is the point. Asana is what I came for, and I’m not shopping for religion. (Fully stocked up, thanks very much.) So what am I doing?

To what extent am I perpetuating cafeteria-style cultural appropriation if I practice yoga without Yoga? (I’m self-servingly setting aside the thornier question of who “owns” yoga – who gets to declare what’s “pure,” “corrupt,” ”authentic,” “bogus,” “right,” and “wrong” – because, honestly, that’s way above my pay grade.) It seems disingenuous (and ironic) to pick-and-choose what I want to practice from a system intended to create integration. But here I am.

When introduced to the concept of devotional chanting in the context of bhakti yoga, I surprised myself by reacting very strongly to a particular mantra (Om Shrim Maha Lakshmiyei Namaha) which asks the Goddess Lakshmi for prosperity. I’m Muslim, and Islam is a monotheistic religion. Associating “partners” with God – i.e., ascribing even a hint of divine power to something or someone other than God – is the most serious transgression in Islam. “Partners” includes avatars – projections of the divine that appear to have distinct personalities and missions. So I’m already biased against asking for help from Lakshmi, or anyone else positioned as a deity.

Is it appropriate to chant or introduce religious mantras into a practice when the people involved don’t actually understand or believe what they’re saying? Devotional chants are often played in yoga classes for various reasons – the instructor could have learned it as a necessary component of practice, they could be practicing Hindus, they could feel it creates an appropriately Indian atmosphere with or without regard to its content, etc. But with a background in an intersecting Indian language (Urdu), I happen to understand enough Sanskrit and Hindi to know what they’re actually saying. This troubles me, not just as a Muslim, but as a non-Hindu. While it makes sense at one level (hey, it’s the Yoga of yoga), are we bringing (imposing?) religion into the secularized version of a religious practice? Is it fair to the non-Hindu people in class that they be passive participants in the glorification of a deity they either actively or passively do not believe in? Is it respectful to the deities and to the Hindu people in class that the mantras are played in an arena where no one is actively honouring them? It’s not simple mood music, sonic wallpaper, or ethnically/culturally pertinent singing – it’s devotional prayer. It’s a serious thing, and reflects the religious roots of the whole package. Am I right/genuine in my integrity if I include Yoga in my yoga? Can I call myself a yoga teacher if I don’t practice Yoga?

Neal Pollack wrote Stretch, a book about his yoga journey; at one point, he describes his experience at a Yoga Journal conference. During the opening of a workshop, the leader invokes the names of Sita and Ram in a call-and-response chant. His inner response? “This actually made me a little angry. I don’t even believe in my own God, and here I was, being asked to blindly worship alternate deities like I was in some sort of Indian nursery school.” (p.228) (Out of context, the quote seems a lot harsher than I bet he intended – the book is meant to be humorous. He’s ostensibly a secular Jew, so he’s coming from a position that’s somewhat related to mine.)

So… the point. I want to keep practicing yoga, and one day teach. But I have no intention of practicing the religion behind it. The Official Yoga Rule Book(tm) makes it clear there are no rules (except when there are), so I shouldn’t feel guilty about this. But how do I just ignore the core tenets of Yoga? I need guidance to understand how to genuinely, with integrity, practice – and teach – yoga without Yoga.

Maybe this is one of those seeming yoga contradictions, like pushing your legs apart and pulling your legs together at the same time?

Maybe I’ll go meditate on that for a while. 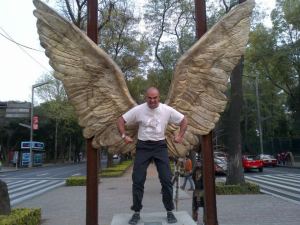 Neman Syed is currently in our 2014 Yoga Teacher Training Program. He was born in Toronto and loves bubbles, elephants, science, biking, and travel. He’s been a nerd all his life, and occasionally a geek. He’s spent most of his life pulled in at least two different directions, and is usually wondering how and why.